The exhibition “George Nelson: Architect, Writer, Designer, Teacher” opens on Thursday at the Yale School of Architecture Gallery, its final stop on a four-year international tour, where it will be on view until January 26th, 2013.

The exhibition, which was organized by the Vitra Design Museum in Weil am Rhein, Germany, includes more than 120 examples of furniture designs for home and office as well as over 50 drawings, models, photographs, films and other materials, and is the first comprehensive retrospective devoted to Nelson (1908-1986), one of the best-known American designers of the postwar era. Although he’s most famous for eye-catching designs like the Marshmallow Sofa, the Coconut Chair and the Ball Clock, Nelson — who was trained as an architect at Yale and was an influential editor at Architectural Forum magazine in the 1930s and ’40s — was most passionate about design’s role in the way people lived and worked. 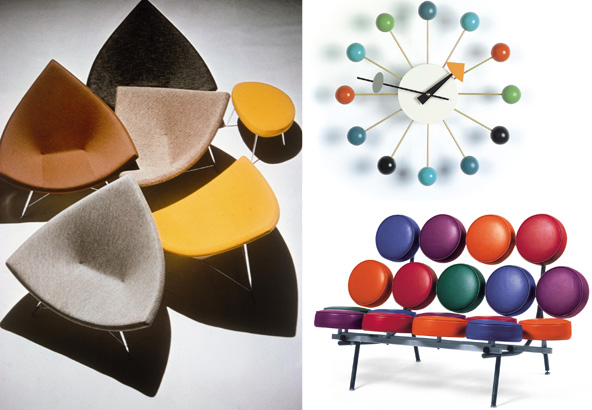 His 1945 book, “Tomorrow’s Houses” (with Henry Wright), espoused the family room and the storage wall; the latter, which was produced by Herman Miller, where Nelson was the director of design from 1945 to 1972, was one of his lasting contributions to the field. Among many other projects in his productive career, Nelson also did corporate image design for clients like General Electric and I.B.M.; he was the head designer for the American National Exhibition in Moscow in 1959; and he came up with a 64-foot-long car and a walk-in engine for Chrysler’s pavilion at the 1964 New York World’s Fair.
An outstanding statement of American culture and design.

I was surprised and very pleased, at the same time, to find that George is still active. He is a great contributor and special voice for the profession of Industrial Design. His legacy is a significant part of our design history.I was fortunate to meet ('62) George while I was working for Herman Miller in Ann Arbor, MI. We later met (early '70's when he came as a consultant to GE's Industrial Design Operation at Appliance Park, KY. He has influenced my career in many significant ways. Thanks George!